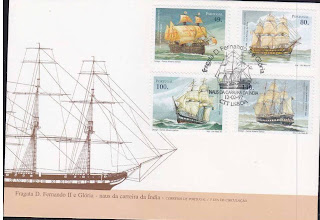 The 19th century frigate 'D.Fernando II & Gloria' built in Daman on the West coast of India is restored by Portugal to act as a museum ship in the Tagus river off Lisbon and re-commissioned in 1998. 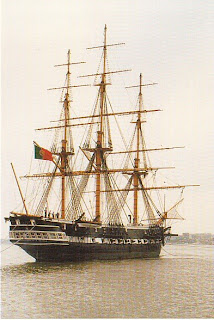 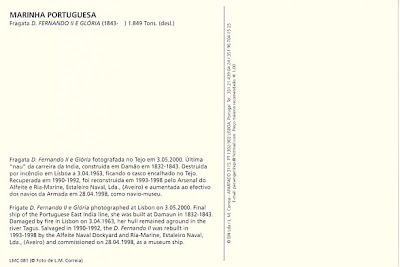 Back of the D.Farnando II & Gloria, PPC

India teak, used to build the frigate, was far more resistant than timber used in Portugal made ships. This 62 metre-long ship made of famous Carreira da India voyages between India and Lisbon over 33 years. It was launched in 1843 and named after the husband of the then reigning Portuguese Queen and Our Lady of Glory.After restoration, the frigate stand 13 metres high and weigh 2,000 tonnes. Every bit of the repaired vessel produced as in the original based on photographs and plans that had survived. Wax dolls replaced about 700 passengers that the frigate transported during her Lisbon-India trips.
‘D. Fernando II  & Gloria’ had also acted as a link between India and Portuguese colonies in Africa – Mozambique and Angola – during her time. She assisted in the trade of precious stones and exchange of animals and exotic plants. Transportation of military personnel and those condemned to deportation was also a part of her functions. In 1963 the frigate served as a training ship, it caught fire due to negligence of a trainee. She remained half-sunk in the waters of the river Tagus for nearly 30 years. The total cost of the repair was more than 1.5 million Contos (60million US$). Which was mostly borne by the Portuguese National commission for discoveries, Portuguese Ministry of Defense and some private patrons . The restoration was carried out under master shipwright, Alberto Costa, at the Portuguese dry docks of Aveiro, while the final phase of repairs were done in Lisbon. Experts commented that it would have been less trouble some to build the frigate anew as it was difficult to restore the Daman teak which had survived. Nearly 1,600 tonnes of timber had however used in the project to reinforce the old Daman wood.
Posted by Flags and Stamps at 11:26 PM 19 comments: