The Indian Navy’s resolute pursuit of indigenous design efforts, combined with endeavours of Indian Shipyards in construction of warships and submarines have laid the foundation of what is termed as “BUILDER’S NAVY” 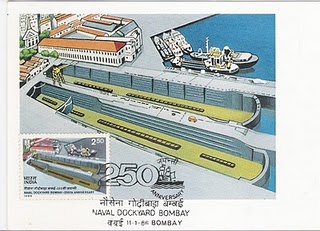 Naval Dockyard, Bombay was established in 1736,the maxim card depicts Dockyard’s Duncan Drydocks. It is the oldest Dockyard east of Suez which commenced its Ship-building and Repair activities in 1736. HMS Minden, an Indian teakwood man-of-war was the first ship to be launched in 1810 from Duncan Dock, Bombay. This was also the first ship commissioned in the Royal Navy from India.HMS Minden was a 74-gun third-rate ship of the line of the Royal Navy, launched on 19 June 1810. She was named after the German town Minden and the Battle of Minden of 1759,a decisive victory of British and Prussian forces over France in the Seven Years' War.

The "Star-spangled Banner", the National anthem of USA was composed on board HMS MINDEN in 1814 by Francis Scott Key in Baltimore harbour when he was a prisoner of the British on board this ship. 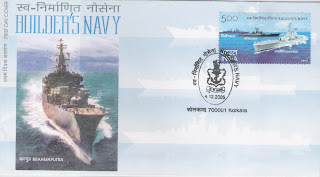 The Navy of Independent India made a modest beginning with half a dozen Destroyers and Frigates,a few Mine Sweepers along with a Corvette and a Survey vessel inherited from the Royal Indian Navy. The creation of a Corps of Naval Constructors in 1956 (not 1954, mentioned in the brochure published by the Dept. of Posts), setting up of a Central Design Office in 1964, establishment of Directorate of Naval Ship Design in 1970, followed by Directorate of Ship Production and Submarine Design has metamorphosed into the controllerate of Warships Production and Acquisitions at the Naval Headquarters. 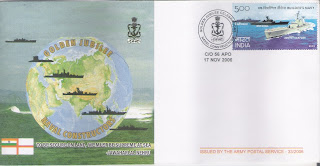 The Corps of Naval Construction, since its inception on 23 November 1956 has rendered yeoman service towards the growth and maintenance of the Naval fleet and has effectively contributed towards transformation of the Indian Navy to a “Builders” blue water Navy.(Excerpts from the Army Postal Service brochure).

Govt. of India’s decision to build Leander class Frigates at Mazagon Dock Ltd. based on the designs obtained from the Ministry of Defence (MOD), U.K.

in early 1960s marked the early steps of modern warship building in the country.MDL in collaboration with Vickers Defence Systems and Yarrow (Shipbuilders)Ltd., 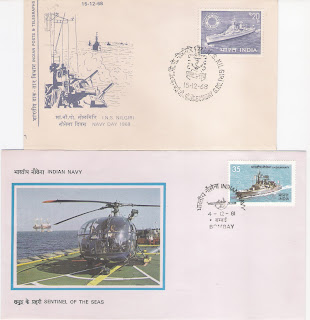 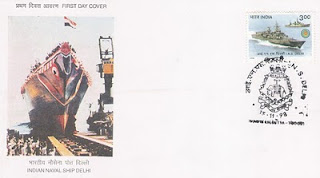 INS Shalki (S-46), the first indigenously built diesel-electric attack submarine. The production of INS Shalki (S-46) and INS Shankul (S-47) submarines at MDL under licence between 1984 and 1994 was another MDL’s hallmark achievement. The submarines were designed by Ingenieur Kontor Lübeck. German Ministry of Defense designated the submarine as “Type 209”, it was developed exclusively for export by Howaldtswerke-Deutsche Werft AG (HDW) - a subsidiary of ThyssenKrupp Marine Systems.

Kolkata based Garden Reach Shipbuilders & Engineers, until 1976 known as Garden Reach Workshops (GRW) Ltd. The company was established in 1884 as a small repair unit of the British India Steam Navigation Co (BISN), On 26 Feb 1934 the Company acquired its corporate entity as Garden Reach Workshops Ltd. Later, it became a unit of P& O Line. The Government of India took it over on 19 April 1961 and placed it under the administrative control of Ministry of Defence.

The name of the company was changed to Garden Reach Shipbuilders & Engineers Ltd.(GRSE) from 1st. January 1977 owing to its growing diversified activities. It has dedicated Units for production of Deck Machinery and

On 1st. July 2006 GRSE took over Rajabagan Dockyard of Kolkata from Central Inland Water Transport Corporation Ltd.(CIWTC Ltd) and became the largest shipyard in the country. 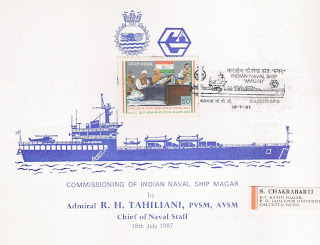 INS Magar (L-20) Landing Ship Tank Large built by GRSE Ltd, commissioned at Calcutta on 18 July 1997. LST(L) is an amphibious warship providing platform for the Armoured Tanks / vehicles and troops. She has landing and stowage facility for indigenously built Dhrub Helicopters.(The postal cancellation was designed by the author)

INS Shardul (L-16) the third LST(L) built by GRSE Ltd. and commissioned on 4 January 2007 at Karwar. This is the first ship to be commissioned in Karnataka and the first Amphibious ship to be is based on the Western seaboard. 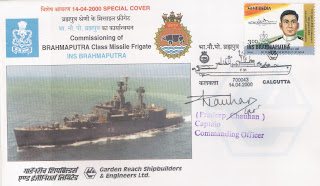 INS Brahmaputra (F-31), the first Missile Frigate built by GRSE  for the Indian Navy, commissioned on 14 April 2000 at Calcutta. The first Naval ship commissioned in the new millennium year. The profile of this ship has appeared on Stamps, First day Covers, Post mark and also on Cover page of Brochures, thus making it  most published (philatelic) warship in India.(The spl. cover was designed by the author) 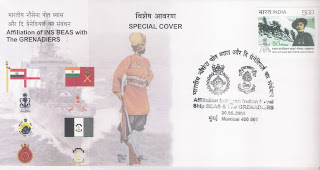 Affiliation of INS Beas with The Grenadiers of the Indian Army.
INS Beas (F-37), the third Brahmaputra class Frigate built by GRSE Ltd for the Indian Navy, commissioned on 11 July 2005. 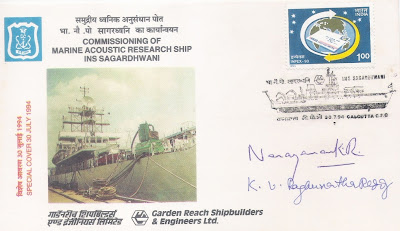 The special cover was released on the occasion of commissioning of INS SAGARDHWANI at Calcutta on 30 July 1994 was signed by the then Vice-President of India K.R. Narayan and K.V. Raghunath Reddy, the then Governor of West Bengal. (The spl. cover was designed by the author).
INS Sagardhwani- a Marine Acoustic Research Ship (MARS) built by GRSE Ltd. for the Naval Physical & Oceanographic Laboratory, Defence Research & Design Organisation, Kochi. The ship is specially designed for underwater acoustic and oceanographic research covering areas of acoustic, physical, chemical, geophysical and meteorological experimental work at sea. 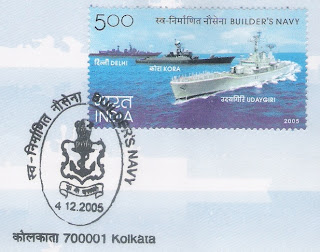 INS Kora (P-61) the third Missile Corvette and the first of the class warship built by GRSE Ltd for the Indian  Navy. Commissioned on 10 August 1998. This is a front line warship equipped with surface to surface and surface to air missiles and anti-aircraft guns fitted with early warning radars. 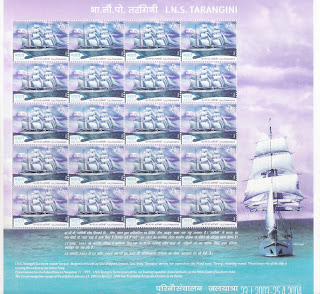 The Circumnavigation of INS TARANGINI, 23.1.2003 - 25.4.2004
‘INS TARANGINI’ is a three-masted barque, designed by Colin Muddie of UK and built by Goa Shipyard Ltd. Commissioned into the Indian Navy on 11 November 1997, forms a part of the 1st. Training Squadron, based at Kochi under the Southern Naval Command. INS Tarangini is the only Sail Training Ship in the Indian Navy. 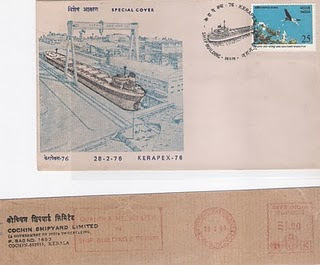 Hindustan Shipyard Ltd. owes its origins to Walchand Hirachand, the then chairman of the Scindia Steam Navigation Company Limited. Born as the Scindia Shipyard in 1941, it was nationalised to be known as the Hindustan Shipyard Ltd in 1961. Having emerged as the largest public sector shipyard, under the Ministry of Shipping, it was transferred to the Defence Ministry in 2009 in order to augment warship productions.

Merchant Shipping and other related activities under Government Control in India

The Ministry of Shipping (MOS), Govt. of India encompasses within its fold Shipping and Ports sectors which include Shipbuilding and Ship-repair, Major Ports, National Waterways, and Inland Water Transport.

Ministry of Shipping (MOS) has been entrusted with the responsibility to formulate policies and programmes on these subjects and their implementation. 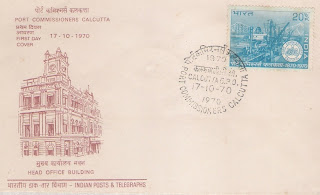 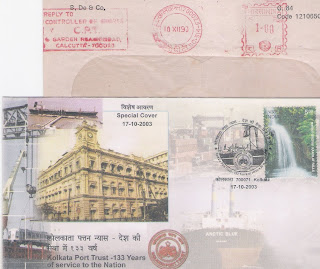 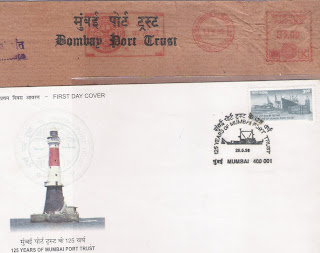 Mumbai Port Trust (formerly, Bombay Port Trust) was established  in 1873. Ever since, it has been the Gateway to India, and was the contributing factor in the emergence of Mumbai as the commercial capital of India. Increasing growth of Port traffic, led to the establishment of the Jawaharlal Nehru Port in Navi Mumbai in 1992. 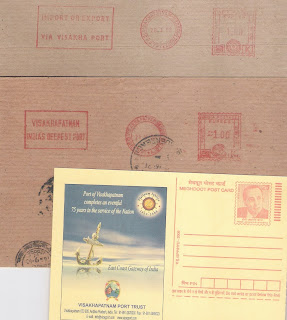 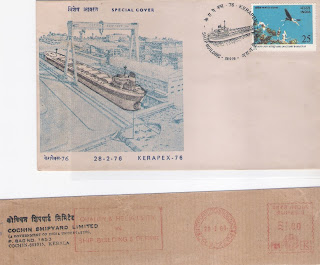 Cochin Shipyard Limited, Kochi, was incorporated in 1972, with the first phase of facilities coming online in 1982. In the last three decades the company has emerged as a forerunner in the Indian shipbuilding industry. This yard has facilities to build vessels up to 1.1 Million tons and repair vessels up to 1.25 Million tons, the largest such facilities in India. 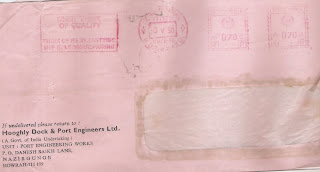 Inland Water Transport on the rivers & some coastal routes was developed by the East India Company men about 180 years ago. The Joint Steamer Companies i.e. India General Steam Navigation Co. and Rivers Steam Navigation Co. were made a P.S.U. in 1967 as Central Inland Water Transport Company Limited (CIWTC). Presently, the main activities are transportation of cargo in the rivers in the Eastern India North-Eastern India and on the Indo-Bangladesh Protocol Routes.

Dredging Corporation of India helps to ensure the continuous availability of the desired depths in shipping channels of the Major and Minor Ports, Navy, Fishing harbours and other maritime organisations. The DCI Head Office of  is  located  at Visakhapatnam.

SUBORDINATE AND ATTACHED OFFICES: of MOS

The Directorate General of Lighthouses and Lightships provides General Aids to Mariner Navigation along the Indian coast. The Headquarters of the Directorate is Noida.(U.P.) 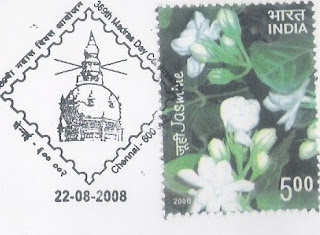 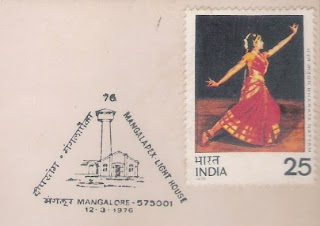 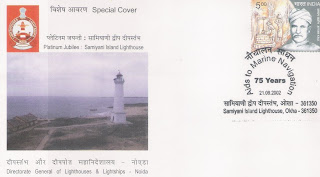 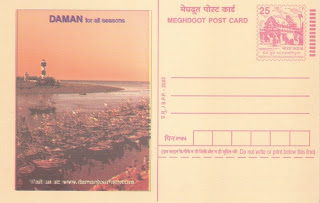 For administrative control of the entire coastline, the Directorate General of Lighthouses and Lightships has been divided into seven Districts having their regional headquarters at Jamanagar, Mumbai, Kochi, Chennai, Visakhapatnam , Kolkata and Port Blair.


Societies and Associations affiliated with MOS 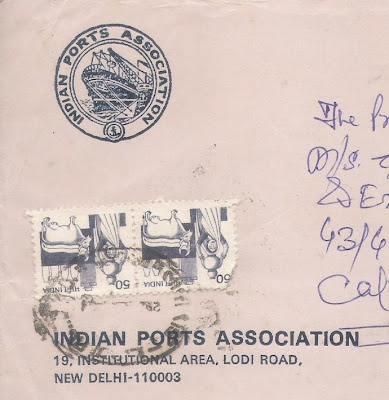 Indian Ports Association being the nodal agency for all Indian major Ports, with its huge data banks undertakes monitoring of Shipping and Traffic related  activities of all Major Ports. Analysis of Ports Performance Indicators, Equipment Utilisation and other productivity parameters and also maintaining the physical and financial progress of various port development projects.
***************
Next Post; Warship building in India
Posted by Flags and Stamps at 4:34 AM 5 comments: