Crests are defined as primarily heraldic symbols above the wreath of a ‘coat of arms’. From time immemorial, empires emblazoned crests on their monuments to proclaim their grandeur, with the advent of heraldry in Europe circa 1160 AD there are several examples throughout  the middle ages of this device  borne on both shield and banners to identify knights wearing armours. Even today Crest means both a heraldic device on a coat of arms, seals, stationery masthead and institutional silver, as well as the ‘top’ of anything.  Crests can be very attractive in appearance , but more than that  they are also informative, being used to show the circumstances, background, achievements, status and even aspiration of the bearer. Hence Crests are more than a pretty artifact. A ‘Crest’ essentially links a legacy to contemporary desire for quality and class. 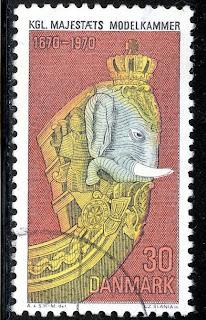 Keith Archibald Forbes in an article titled Bermuda's Royal Naval emblems and NATO ships' crests Graphic reminders of a special tradition on the walls at the former Dockyard writes; “It is entirely possible that the origin of ships' crests goes back to the times when many people were illiterate and for this reason a pictorial means of identification developed, to enable those who could not read to recognize the pictorial symbols of royalty, other aristocrats, military commanders and the like and what they owned or controlled.  Coats of arms and other heraldic symbols, still seen in many countries, are cases in point. In the case of Britain's Royal Navy, it has been a tradition for centuries for often warlike, descriptive and always highly individual names and ships' crests to be given to warships, all prefaced by "HMS" for His or Her Majesty's ship.  Since the late 19th century in particular, crests, or coats-of-arms were displayed on the superstructure of all English warships”. (http://www.bermuda-online.org/rndshipscrestswalls.htm) 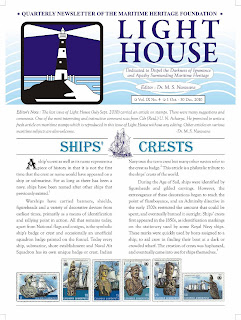 I must admit that I learned compared with  what I thought I knew when I got the special issue on the captioned subject of the Quarterly Newsletter of the Maritime Heritage Foundation “LIGHTHOUSE” (July-Sept.2010). Cdr.(Retd) U. N. Acharya, the founder secretary of the Naval Philatelic Society of India through  his well documented and profusely illustrated article has done a splendid job on this little known area of Maritime Philately. Thank you Cdr. Acharya.
Posted by Flags and Stamps at 12:53 AM No comments: