Merchant ships have used false flags as a tactic to escape enemy attacks since time immemorial. There are plenty of examples found from as early as the Roman era through the Middle Ages, till modern time. The modern practice of registering ships in foreign countries to gain economic advantage originated in the United States during World War I.
“Flags of Convenience” or Privilege denote registry of a merchant ship under a foreign flag. A "Flag of Convenience" ship is one that flies the flag of a country other than the country of ownership. Cheap registration fees, low taxes and freedom to employ cheap labour, and leniency in safety requirements are the motivating factors behind a shipowner's decision to 'flag out'. 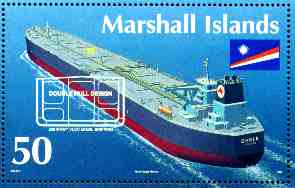 Till 1960s ships registered in ‘Flags of Convenience’ countries used to fly the merchant flag of a ‘PANLIBHONCO’ (Panama - Liberia - Honduras – Costa Rica) country to enjoy nominal registration fees, liberal tax concession of investment, no compulsion to employ nationals of the flag country and many such handouts. 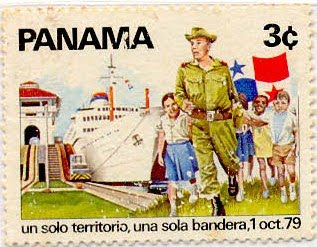 Panama extended the first "Flag of Convenience" and soon the practice of FOC ships grew in popularity. In order to control the monopoly of the Panamanian registry, in 1948, the United States helped Liberia create its "open registry". The Liberian registry  attracted American oil companies and Greek shipowners who sought to avoid high labour costs. 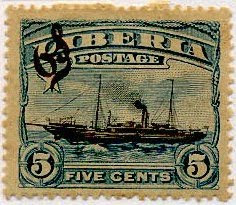 The Liberian ship registry--set up by U.S. shippers after World War II--is cheaper than nearly any other in the world, Liberia, founded by freed American slaves, has always enjoyed a close trading relationship with the U.S. Today Liberia’s merchant marine is one of the world's largest. The success of Liberia's registry encouraged the opening of other competing registries.

As of 2009, Panama, Liberia and the Marshall Islands are the world’s three largest registries in terms of Dead Weight Tonnage (DWT). Other significant "Flags of Convenience" includes the Bahamas, Malta, Cyprus, Antigua, Bermuda, St. Vincent and Cayman Islands.

The International Transport Workers' Federation's (ITF) Fair Practices Committee (a joint committee of ITF Seafarers' and Dockers' Unions), which runs the ITF campaign against FOCs maintains a list of 32 (thirty two)Registries it considers to be FOC registries. 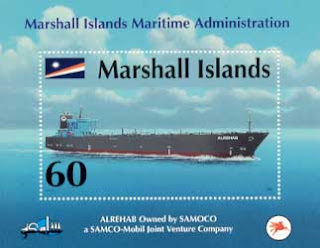 The Marshall Islands Maritime Registry is highly acknowledged throughout the world, not only by the Yachting community, but by the entire maritime industry due to its easy registration processes. 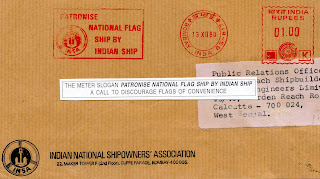 The Slogan of the Franking meter reads PATRONISE NATIONAL FLAG SHIP BY INDIAN SHIP. There is concern at the increasing use of Flags of Convenience to enable ship owners to escape obligations inherent in using the Flag of ship’s owners home country and thereby jeopardizing the safety, the environment and seafarers conditions.
According to the International Chamber of Shipping (ICS), presently, more than half of the world's ships are registered with "Flags of Convenience". 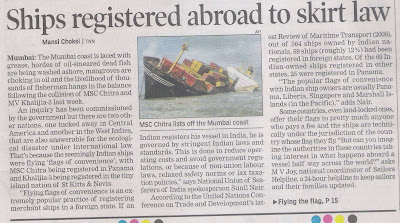 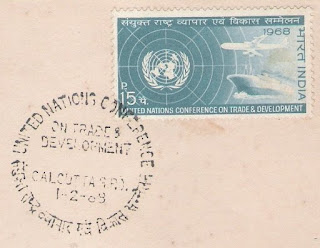 Mansi Choksi of the 'Times of India' reports (August 14, 2010), "According to the United Nations Conference on Trade and Developments (UNCTD)'s latest Review of Maritime Transport of 564 ships owned by Indian nationals, 69 ships (roughly 12%) had been registered in foreign states. Of the 69 Indian-owned ships registered in other countries, 25 were registered in Panama. "The popular "Flags of Convenience" with Indian ship owners are usually Panama, Liberia, Singapore and the Marshall Islands. Some countries even land-locked ones, such as Mongolia offer their Flags to pretty much anyone who pays a fee and the ships are technically under their jurisdiction of the country whose flag they fly". 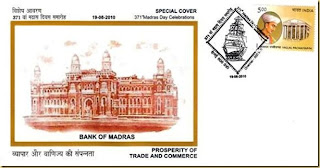 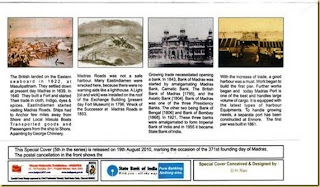 Whole of this week Madras (Chennai) will be agog with "Madras Week". August 22nd. is considered as the 'Founding Day of Madras' in 1637.
Since 2004, this day/week is being celebrated as "Madras Day" - with lot of  exhibitions, book releases, etc. on Madras.
We are the only group [Madras Heritage Lovers], bring out unique and special Postal Covers on Madras. This year's theme is  "PROSPERITY of TRADE and COMMERCE".
The cover shows; the old Bank of Madras building (presently State Bank of India). Being a good trader, Pachaippa amassed wealth in trade with East India Company, finally leaving it to a Trust for philanthropic purposes. So, his stamp is selected and affixed on the cover.
The cancellation shows "an old 'East India-man' in full sail" showing the means of  Sea Trade.

Back of the cover shows; an early Landing Ship, a Ship wreck, the first Pier, and the Bank of Madras.
(Contributed by D.H.Rao of Madras (Chennai) . Anybody interested to get the cover @ RS. 25 each may contact Mr. D.H.Rao, email; dhrao1939@yahoo.com 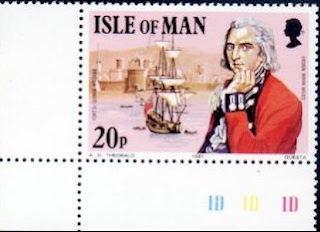 The Isle of Man stamp depicts "Fort St. George, Madras", an East Indiaman and the effigy of Ensign Mark Wilks. 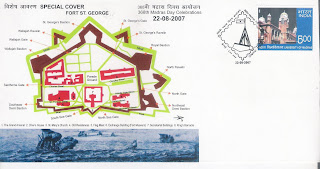 In 1687, Elihu Yale, the Governor of Madras (after whom the Yale University in the USA has been named) hoisted the Union Jack for the first time on the flag-mast replacing that of the East India Company's Ensign. The 47.5 meter (156 feet) flag-mast is the oldest and tallest Flag-mast ever built in India. The original wooden mast was replaced by a steel mast of equal height in 1994. 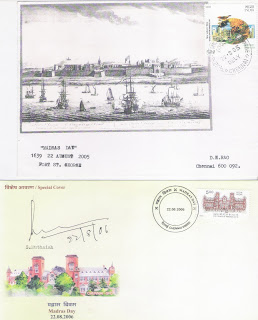 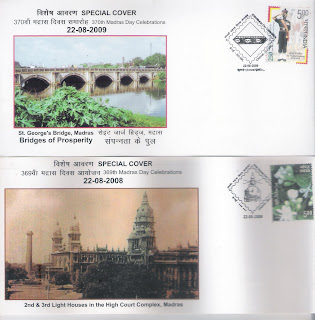 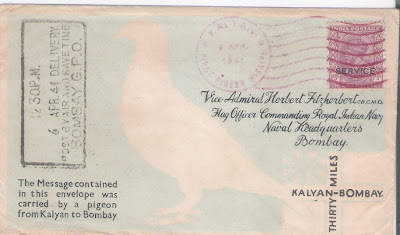 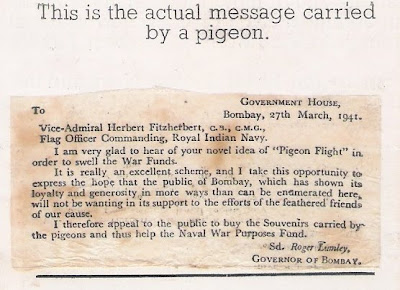 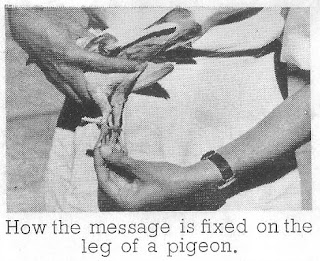 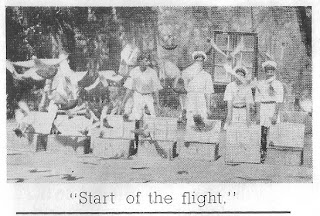 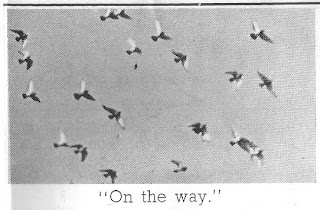 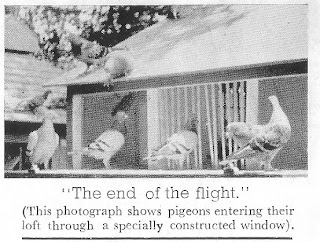 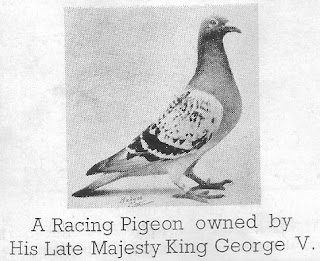 The Flight was organised for charity and the amount realized from the sales of these 2000 “Flown Messages” enclosed in pre-cancelled envelopes were donated to “The Royal Indian Navy War Purpose Fund”. Each envelope for sale to the public was priced at Rs. 2/- 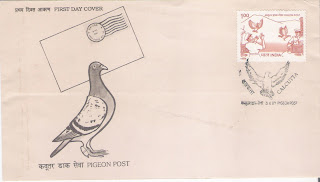 The Indian Postal stamp commemorating the first ‘Pigeon Post’ organised by the "Royal Indian Navy" in 1941(issued on 3rd. November, 1989).

“Jack” is the name given to the “Flag” flown on a small vertical spar (pole) at the stem or on the bowsprit of a warship.

E.M.C. Barraclough, the internationally renowned vexillologist writes ‘although at first ‘Jacks’ were flown from the mast-head of a ship, it soon became the practice to fly them from the ‘sprit-mast’ which was fixed to the bowsprit. It was often been thought that the “flag” is called a “Jack” because it flies from the ‘Jackstaff’, but actually the ‘staff’ is called a “Jackstaff” because the “Jack Flag” flies from it. Likewise, the British “Union Flag” is most often wrongly referred to as “Union Jack” 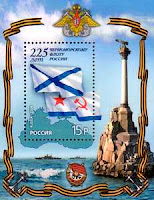 Most countries use the diminutive of their National flag as ‘Jack’

Scandinavian countries State flags and Jacks are 'swallow-tailed' or 'split' at the fly. 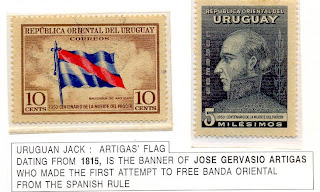 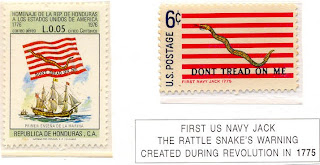 Some countries have/had a ‘historic’ or other special design ‘Flag’ for use as ‘Jack’. 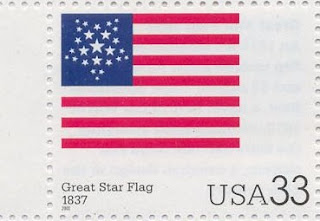 The Great Star Flag 1837
An 1818 act established that the Great Star Flag include a star for each state and 13 stripes. Capt. Samuel C. Reid, a naval hero of the war of 1812, recommended arranging the stars into one 'large Star pattern', a common design in the 19th. century. 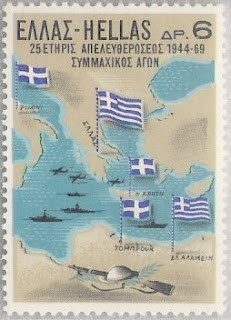 Greece has two Flags, one with the simple ‘Greek Cross’ on blue field used as ‘Jack’ and the other with the ‘Greek Cross at the canton and nine blue and white stripes’ used as ‘Ensign’ 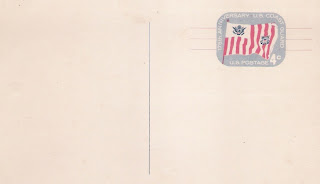 The U. S. Coast Guard Ensign and Jack
The badge has the motto ‘Semper Paratus’ (Always Prepared) and the date ‘1790’. The post card commemorates the 175 th. Anniversary of the U.S. Coast Guard.